Native Hill at Foothill College is enjoying a renaissance. Three years ago, Frank Niccoli, an adjunct instructor at Foothill, envisioned a demonstration garden that would show the community the beauty and wisdom of using California Natives in the garden.

The first step was to install an irrigation system. This installation was made possible by a generous donation by Michelle Chu, the owner of The Village Gardener, Inc., who provided the equipment and a crew to dig the trenches and install the valves, piping and heads. Frank Niccoli designed the system and managed the installation. A total of 48 12” popups with low precipitation nozzles (0.45 gpm) were installed. David Sauter, the Director of the horticulture program at Foothill College, along with the valuable assistance from Mike Diefenback and a crew of student labor, finished the installation.

In the Spring of 2017 the plant installation and maintence class at Foothill pruned plants that had not been touched in years. They removed concrete, trash, an old drip system that never worked and established a rough outline of a pathway. They also installed the first of many plantings and sheet mulched. Niccoli commented, “I cannot wait for the new direction this garden will take. This will enhance the learning experience of the Hort Geeks and the Biology Department Foothill College by giving them a living laboratory.” 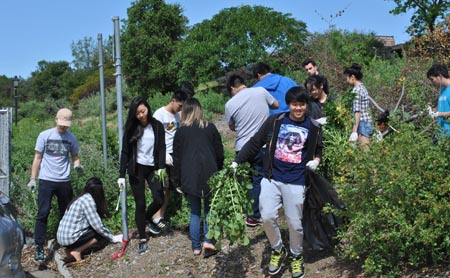 Foothill College is making progress in improving Native Hill. Recently Foothill College completed some Measure C construction work in areas adjacent to Native Hill. For example, the parking lot pathway that divided the Native Hill into two gardens was improved. While this construction was underway, a long awaited irrigation project was put on hold. Now that the Measure C work is completed, most of the Native Hill garden has a new irrigation system installed and the irrigation system will be soon connected to an irrigation controller. In the meantime there are occasional workdays at Native Hill with students from the Horticulture and Biology Departments.

Many of the specimen plants, most of which date back to CNPS, are mature sized. Several species are blooming profusely right now. The newly routed bus passes by a row of Salvias, Aesculus, Arctostaphylos and Cercis that inspire the students with native plants. As with any garden keeping up with the ongoing maintenance tasks is a challenge, and more volunteers can make a big impact in keeping Native Hill in top shape.

The photos above and below were taken by Tom Lee on March 18, 2016, as he joined a workday at Native Hill with a large group of Biology students.  The work was pulling out weeds and invasive grasses and then applying mulch. 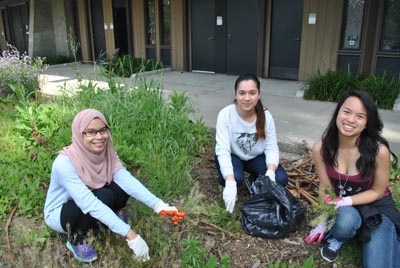 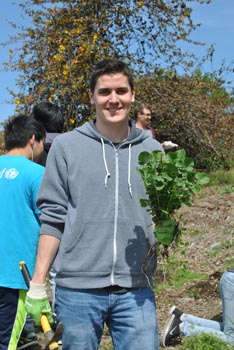 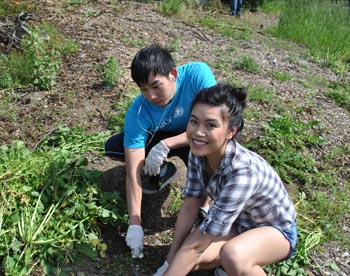 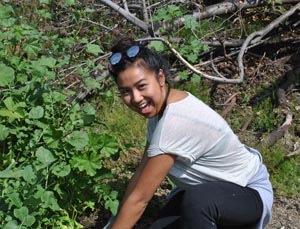 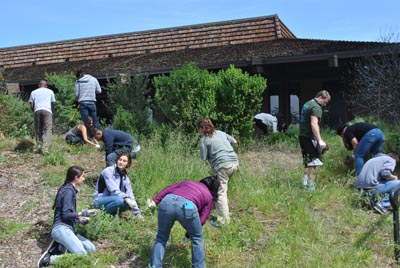 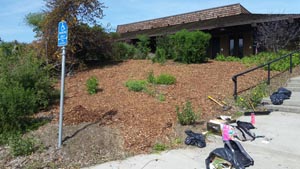 Native Hill is the name for a native plant garden at Foothill College in Los Altos Hills. It was started in 1982 by Robert Will, horticulture instructor at the college and chapter president 1981- 83 and state president 1984-86. He started the collection to teach students native plant identification and care. CNPS member Ellie Gioumousis lead CNPS SCV's support for the garden for many years, helping it to reach over 160 species and cultivars.

Chapter volunteers have expanded and improved the collection ever since. In 1991 Don Brandeau and Mary Kaye, both design professionals and chapter members, created a unified planting design. The College added irrigation as well as removed blue gum eucalyptus, frozen in 1990, through agreement with Mal Leal, director of operations at Foothill. The native plants responded to the tree removal with improved vigor.

160 species of natives planted on this hill bring tremendous educational and aesthetic benefits. The community TV station on campus made a video featuring the garden in 1994. The SJ Mercury News had a full-page article on Native Hill in the weekend edition on July 1, 1994. Channel 6 had a half hour show on it in 1999.

The plants at Native Hill are used by faculty and students from Horticulture and Biology departments. A faculty member coordinates the activities at Native Hill.