Sacrifice some native plants in order to save the fountain thistle? 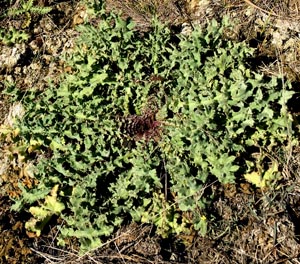 After several years of corresponding with Jake Sigg by email to publish announcements of fountain thistle work parties in the Blazing Star newsletter, I decided to attend one such workday so I could finally meet him in person.

On a sunny clear October day I drove my car to the "end of Lessingia Court" in San Mateo and as promised by the September-October 2015 Blazing Star announcement, I found a CNPS work crew gathering.

Soon after I finished tying my boot laces, Ken Himes called out to me in greeting.  It was good to see a familiar face, since it was my first time joining in on the fountain thistle restoration project.  Ken had laid out tools and gloves in the back of his car for the volunteers.

Jake explained that the project started when the entire hillside above the highway was thickly covered with pampas grass.  Caltrans said they'd give the pampas grass three separate sprayings to kill it, as long as CNPS would follow up with on site visits to pull the pampas grass resprouts.  The pampas grass seeds only live for about four months, so after a year only new seedlings from outside seeds would remain.  Now after twenty years, the project has workdays only twice a year, in spring and in fall, which are successful in keeping the pampas grass nearly non-existent and the fountain thistle returning. 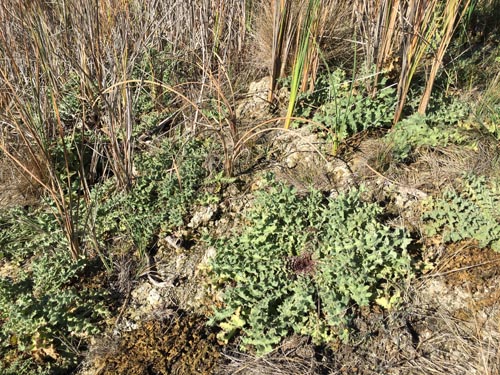 From the gathering place we walked single file out to the work site, along a thin trail past teasel and other weeds that soon gave way to mostly bunch grass dotted with coyote brush on a moderately steep slope above Interstate 280.

Soon we came upon our first seep, a serpentine slope with a little water seeping down here and there, with many rosettes of young fountain thistles tucked among other sedges (rushes) and other low vegetation and dead pampas grass bases.  Ken explained that the fountain thistle needs a "high water table" but pampas grass and even some native shrubs with their deep roots will lower the water table, making it difficult for the fountain grass to find the necessary water to grow.

The project has indeed been a success: the most recent fountain thistle count was done by Crystal Niederer of the Edgewood Restoration Project.  She gave up counting after finding 6,000 individual plants.

See the photo below of Ken and Jake on either side of the rushes to measure for the extent of the fountain thistle growth. 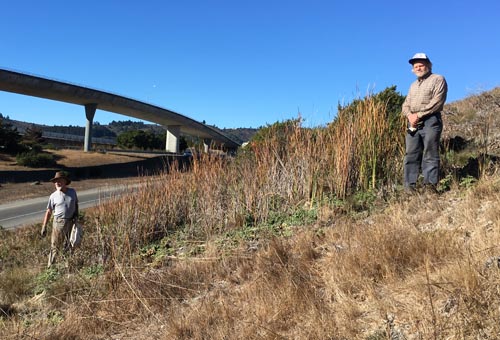 As in any habitat restoration project, volunteers need to learn the difference between plants to be saved and plants to be pulled out.  Jake showed us the difference between pampas grass seedlings and young rushes.  The pampas grass has a definite keel along each blade and the grass edges are sharp, especially if you try to run your finger down the edge to the base.  The rushes have a less distinctive keel and the grass edges are smooth - you can run your fingers up and down the edges.  Jake said we only needed to get a few inches of the pampas grass roots in order to kill the plant.

In spite of the overall project success, there are plenty of weeds remaining to pull, including blackberry, yellow star-thistle and the occasional pampas grass seedling.  We had a large enough crew to split into two, so I joined the group heading to the "far west," an area that sometimes gets neglected when the workday crew is smaller.

There, we concentrated pulling weeds from within a large area of rushes just above the highway's break-down lane.  To pull blackberry, Jake showed me how to hold the seedling a foot above the ground with one hand, near the ground with the other, and slowly pull to get a goodly portion of root along with the stem.  We pulled a couple of pampas grass seedlings from the rushes, and a few other weeds, then considered the coyote brush.

The controversy here is was it necessary to pull native shrubs and trees to save the fountain thistle?  Did we want to restore the hillside to pure bunch grass and other small native plants?  There were several coyote brush shrubs mixed in with the sedges, and the hillside held the occasional small oak tree and toyon bush.  The coyote brush was definitely encroaching, as there were plants of all sizes and we observed far-away hillsides that were mostly covered with coyote brush.  The restoration area is on a 30-year old roadcut, so the vegetation has filled in starting from bare soil that long.

Ken and Jake had differing opinions on what to do.  In the end Jake said another volunteer, Dave, and I could take out coyote brush if we wanted to.  I worked with Dave to dig out several small coyote brush including several inches of root, with a mattock.  Then, emboldened by our success and the loppers and pruning saws at hand, we took on some of the larger shrubs.

What to do with the dismembered coyote brush branches?  A deep pile of brush would kill the grass underneath.  Instead we laid out the brush in a single layer at the edge of the sedges, so enough sunlight could get through for the sedges to spread and grow up within the dead branches.

At about the time I was starting to feel tired, I saw that noon had arrived and the crew gathered their tools and started heading back to the gathering point.  The hillside sure was pretty on the clear, sunny day.  If not for the constant background roar of the passing cars, we could have been on any wild, grassy open space.  Once we returned to our parking spot, we returned the tools and gloves to their owners and I thanked the leaders for a pleasant outdoor experience with like-minded volunteers.

The project welcomes new volunteers.  Check a Blazing Star newsletter early next spring to learn of the next fountain thistle restoration workday.

All photos by Dee Wong