This section is adapted from a handout prepared by CNPS member MaryRuth Casebeer, the author of Discover California Wildflowers and Discover California Shrubs. MaryRuth did not have a teaching credential, but loved working with young children, and taught gardening at Curtis Creek School in Sonora, California for a number of years. Her year-round program has been a tremendous success, which she attributes to the following:

Classes are conducted for 40 weeks of the school year. Each student attends a weekly class for six to eight weeks, each class being about 40 minutes in length. Each new class parallels the academic quarter, more or less. Teachers release the students during their class time.

December and May plant sales pay for supplies purchased, mainly seeds and a few plants, labels and potting soil. Plants are sold to parents, employees and students at the school. The plants sell for about half the nursery price; students pay half of the adult price. And, do they buy!!

California has high mountains, valleys, ocean coastline, and many rivers and streams. It supports grassland, oak woodland, chaparral, riparian and forest habitats (communities). The varied settings in California supported many different tribes of native people prior to 1700.

Food resources available to native people (California Indians) were bountiful. California supported the highest density, non-agricultural (farming) population in North America. In 1769, when the first Spanish colonists arrived, there may have been 300,000 Indians living in California (west of the Sierra Crest).

Native Californians were hunter-gatherers, which means they ate wild plants and animals that they could gather or capture. Women usually foraged for plants and men fished and hunted. Native Californians had to be especially attuned to the seasons. They had to know where each variety (species) of edible plant grew and when its fruits because ripe. An error of a week or so might mean the family or band would go without a particular food, a supply of seeds or plants for basketry, or a needed tool for an entire year, until the required plant would once again come into its useful stage. Many tribes moved with the seasons to gather plants or hunt coinciding with plant ripening or animal movements.

Native plants had many uses. In addition to being gathered for food, they were used for shelters, for clothing, baskets, dyes, weapons, cosmetics, and medicine.

In many cases the work of gathering plants fell to the women and children. Cleaning seeds and grinding acorns took a lot of time. Information on plants was passed on to children while they collected and prepared plants with their mothers and other women of their family group. By the time children were nine or ten, they could recognize hundreds of different plants, knew where they grew, and which parts of the plants were useful.

Plants were tended to get the right kind of plant material for basket making. Roots of sedge were transplanted and willows pruned and thinned for harvesting each year.

From Grasslands and Chaparral Communities

Pinole is the name given to meal made from small seeds. Seeds were collected and cleaned of chaff. The clean seeds were placed in a basket with coals and tossed. Seeds were then ground and sifted. It was eaten by pinches taken with the fingers. Seeds for pinole were collected from chia (Salvia columbariae), red maids (Calandrinia ciliata), and grasses such as purple stipa (Nassella pulchra).

Brodiaea, calochortus and other lilies were harvested with a digging stick. Tubers such as yampah were also gathered and used for food.

There were many uses of soap plant (Chlorogalum pomeridianum)-- including fishing without a hook. The bulb was mashed up raw and placed in streams. Fish would float to the surface and could be skimmed out with sieves of willow. Other uses of the soap plant parts: fibers around bulb were used for brushes and the bulb itself was used for shampoo.

Plants found in oak woodlands were used as a source of basketry material, arrow wood, tools, and food.

In the fall acorns were knocked from oaks with a long pole and collected in large cone shaped baskets. The large baskets, called burden baskets, rested on the back like a back pack and was held up by a wide band across the forehead. This left both hands free to gather acorns. Good harvesters could collect up to 75 pounds of acorns in an hour.

Before using, acorns must be cracked open and pound (or hit) in a mortar or in a small depression in a rock outcrop. The pound acorns were sifted to remove large pieces that needed to be pounded again. A brush made of soap plant fibers was used to sweep up stray bits of acorn meal so none was lost. After pounding and sifting, the acorn meal must be leached several times with water to remove bitter tasting tannic acid from the meal. The meal was then cooked as mush or bread.

Another nut less commonly used was California buckeye. Seeds are poisonous unless roasted, ground and leached. Buckeye was used primarily when the acorn crop was poor.

As described above, berries, bulbs, and greens were also used in oak woodland communities.

Pine nuts were collected and used for food.

Large burden baskets for carrying big loads of acorns and other foods often had a foundation of split roots of cedar, gray pine or other conifers.

Medicinal Plants were collected from a variety of plant communities. Some of these plants include:

For an extensive discussion of medicinal uses of native plants, see "Plants Used by the Indians of Mendocino County California" by V.K. Chesnut, listed below under References.

Anderson, M. Kat and David L. Rowney. 1998. "California Geophytes: Ecology, Ethnobotany, and Conservation." Fremontia 26(1): 12-18. [Note: Geophytes are plants that die back to subterranean storage organs, such as bulbs and tubers.]

Teacher Bryan Osborne, established the two-acre science study area in 1970 and recently established a new pond area. Mr. Osborne is a mentor teacher who has developed curriculum materials and labs for the Nature Area. Peterson Middle School is located in Sunnyvale, within the Santa Clara Unified School District.

Hacienda Science Magnet
Originally planted in 1971, the one-acre Outdoor Classroom is used to introduce children to the natural sciences and horticulture. The Outdoor Classroom was initiated by teacher Edy Young, her husband Joe, and parents. Teacher Carolyn Flanagan has been responsible for programs since Edy's retirement.

Beginning in 1992, the San Jose Water Company, the corporate Adopt-A-School partner of Hacienda Science Magnet School, parents, and some 30 Bay Area businesses completely renovated the Outdoor Classroom. These renovations included the construction of new ponds and a stream, a programmable irrigation system, and a 625 square foot covered outdoor study area with benches and tables.

To add your school or a favorite outdoor education site, please contact Nora Monette: This email address is being protected from spambots. You need JavaScript enabled to view it.

Local Native Trees to Plant at your School or Home

With the exception of the coast redwood and white alder, most of our locally native trees deserve to be cultivated more often in the San Francisco Bay area. Many are beautiful and easy to grow--they are well adapted to our climate and soils. Native trees offer special values for wildlife as well. 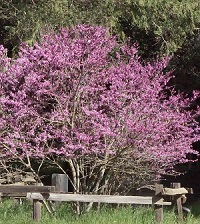 Cercis occidentalis (Western Redbud) is a deciduous tree that is covered in stunning pink flowers just before leaf emergence in the spring. It is a small tree - growing up to 20'. It is fairly tolerant of a wide variety of soils, including clay. There are some beautiful specimens growing near the CNPS SCV Nursery at Hidden Villa.

Arctostaphylos 'Dr. Hurd' (Dr. Hurd Manzanita) is a lovely choice if you need a small tree. While most manzanitas are closer to shrub in size, this is one of the tallest and can grow up to 15' tall (and wide). It originated in a garden in Portola Valley and does well in a wide variety of garden situations.

The gray pine is a quite ornamental tree in cultivation and more drought tolerant and more resistant to air pollution than most pines.

Another small tree is Ceanothus 'Ray Hartman'. This one can grow up to 20' and is covered in beautiful blue flowers in early spring. It grows fairly quickly and is a good choice if you need a small, well-behaved tree.

Contrary to general opinion, the valley oak and coast live oak, two beautiful heritage species, grow fairly quickly and are easy to cultivate. While ancient trees which grew to maturity under summer dry conditions may resent irrigation, young oaks adapt to garden watering. Indeed, under garden conditions seedling oaks may reach 25 feet in ten years--they actually grow faster than many commonly planted trees! Our native oaks deserve to be planted far more often than they are; happily, they are becoming more popular.

Two of our native trees deserve to be mentioned here especially for those who garden with wildlife in mind. Aesculus californica (California buckeye) has lovely structure, interesting fruits, spectacular flowers, exquisite spring foliage--but a decided off-season as the deciduous leaves turn brown in the summer; it is the first to drop its leaves. Its flowers are despised by some because their pollen is somewhat toxic to the non-native honeybee, but no flowers have more value to butterflies and native bees. In bloom this tree may be festooned with butterflies; we have seen seven species nectaring on one tree simultaneously! The tiger swallowtail, mourning cloak, California sister, California tortoiseshell, spring azure and many others visit this tree. It is easy to grow.

Sambucus nigra ssp. caerulea (Blue Elderberry) is a fast growing deciduous tree with summer fruits that attract a wider range of birds than any other tree. Songbirds favor it highly for food and nesting. It is easy to grow and can adapt to both dry and moist conditions. A stump-sprouter, it is amenable to pruning, which may help keep it presentable.

The California nutmeg is an unusual conifer and not difficult to grow, though a bit slow. Its needles are extremely sharp, so it should not be planted near a path.

Our California laurel becomes a stately tree. It is slow growing, but well-situated specimens are a fine gift to future generations.

The coast redwood is met with too often in cultivation locally. It does best when planted in cool areas with significant fog drip. The temptation to plant this lovely tree in dry inland areas has resulted in many dead or dying trees. Unless you live in an area where these trees grow naturally, resist the urge to plant one.

Many people long to grow the madrone, one of the world's most beautiful broadleaf evergreen trees. It can be challenging to cultivate, but if you like a gardening challenge, try this treasure!