Where are rare plants found in the Santa Clara Valley chapter? What is different about different parts of the chapter service area? Think about where you may live, or work. Do you know where a rare plant hotspot is near you? Have you been to any of these places and seen the rare plants in their habitats? 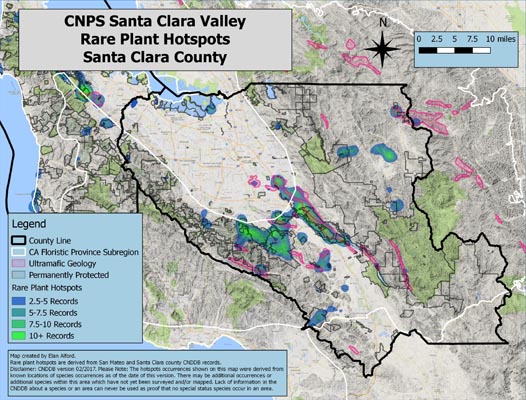 There is a state level CNPS effort underway to identify conservation priority areas. The program is covered in the 2015-2016 Conservation Report, available from the CNPS website. The state level program is called the IPA Initiative. IPA stands for “Important Plant Areas”. The goal is to create a statewide database and comprehensive map of the most important plant conservation targets. It seems that the idea germinated at the state level after the East Bay Chapter produced their guidebook, Guidebook to the Botanical Priority Protection Areas by Heath Bartosh, Lech Naumovich, and Laura Baker.

I used California Natural Diversity Database (CNDDB) Rarefind records and analyzed this data to create rare plant hotspots maps for the Santa Clara Valley Chapter counties. The CNDDB is a natural heritage program and state rare plant inventory. The program is administered by the California Department of Fish and Wildlife. The resulting map is a summary figure based on 762 database records and shows where records are clustered in the two counties. The map shows the areas with the highest data point density. A rare plant hotspots map is a starting place for our local chapter to assist the state to achieve the IPA Initiative goals. Map data can inform us on where conservation efforts can be focused.

Rare plant hotspots were mapped for each county, but they are discussed below by floristic province subregion. There are three California Floristic Province subregions represented in the counties: Central Coast, San Francisco Bay, and Inner Coast Range. Ultramafic geologic areas are shown on the maps because these are areas likely to support serpentine vegetation, with serpentine endemic species and plant assemblages. The maps show several rare plant hotspots that align with ultramafic geology. Areas of permanently protected lands are provided on the maps from the Greenbelt Alliance’s 2017 report and data in At Risk: The Bay Area Greenbelt. The protected areas include lands such as parks, open space, and preserves. Many hotspots are identified in permanently protected lands. Below the two counties are discussed by each of the three subregions, with a focus on landforms and several of the identified hotspots.

Editor's note: click on each map image to view the full-sized PDF.

The Central Coast Subregion. The Central Coast region occurs in both San Mateo and Santa Clara Counties. It has the Pacific coast and the lowlands and valley floors around the San Francisco Bay. In San Mateo County coastal rare plant hotspots include Año Nuevo State Park, Pescadero State Beach and Marsh Natural Preserve, Montara State Beach, and Fitzgerald Marine Reserve. The Peninsula Watershed Golden Gate Recreational Area and San Bruno Mountain are mountainous hotspots in the Central Coast subregion. Edgewood Natural Preserve and Crystal Springs County Park are associated with an ultramafic corridor in the San Andreas rift zone in San Mateo County. In Santa Clara County, an ultramafic geologic area near Hassler Parkway is a hotspot. This area is a northern part of an ultramafic band that includes Coyote Ridge to the south. There are not many hotspots on the valley floor, but Alviso and the Shoreline area are hotspots along the San Francisco Bay margin in Santa Clara County.

Inner South Coast Ranges District. Only the southern portion of Santa Clara County, from Gilroy and going south, is in the California Floristic Province Subregion called the Inner South Coast Ranges District. No part of San Mateo County is located in this subregion. No rare plant hotspots have been identified in this region. However, an area with ultramafic geology in the Subregion suggests that a hotspot might be there and is just waiting to be identified. 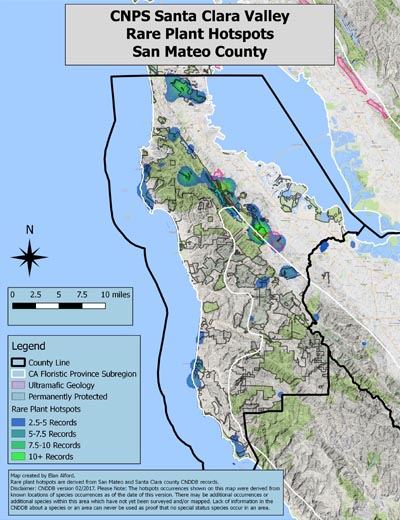 After I made these maps I wondered, why are the hotspots located in these places of the county? My answer is incomplete, but my first impression of these maps was that the two counties hold many hotspots and the highest density of rare plant records appear centered on areas of ultramafic geology. The maps also suggest to me that accessibility may also be a factor in hotspot locations. Because the rare plant data must be observed, someone must be able to get to the places to record the data. For example, the Highway 1 corridor in San Mateo County and the Highway 130 corridor in Santa Clara County both have hotspots along these roads, yet neighboring regions with fewer roads do not have hotspots.

My hope is that this initial analysis helps to raise interest in rare plants and can aide state CNPS goals. There are amazing resources in our local chapter, and it can be quite easy to get out and see a rare plant. A good bet would be visiting a park in one of the hotspots. Or, if you want to get out and discover something new, there are several areas where we have little data. There very well may be ample opportunity to find new rare plant records in these less traversed areas. Even if this hotspot map doesn’t show results in a particular location, that doesn’t necessarily mean rare plants are absent. In essence, an absence is not absolute, particularly in the undeveloped areas of our counties. There are many places that just need someone to go out, explore, and report back to CNDDB. Consider joining in on the exploration efforts in the chapter’s Rare Plant program.

The CNDDB data I used to make the maps is not publicly available. A reason for that is to protect these treasures for the future. Fortunately, many of the hotspots identified on these maps are already in permanently protected lands. For public information on where to access rare plants, and specifically, for information on which public parks you may find rare plants, I recommend that you consult the chapter checklist written by Toni Corelli, Checklist of the Vascular Plants of San Mateo and Santa Clara Counties, California.

For more information on this project please contact Elan at This email address is being protected from spambots. You need JavaScript enabled to view it..