Botanizing in the State of Jefferson July, 2007

On June 30th, nearly 30 CNPS members made a seven hour voyage to the area of far northern California that many consider to be the heart of the State of Jefferson. What follows is a summary of where we went and what we saw.

Situated right on the wild and scenic Klamath River, Sarah Totten campground was all ours, and offered a wonderful place for us to call Home Sweet Temporary Home. On Sunday July 1st, we caravaned to Cook & Green Pass via Saeid Creek Rd., making several stops on our way up. At our first stop, sharp eyes spotted an interesting saprophytic plant growing in the forest duff: Monotropa hypopythis or pinesap, and this was a first time sighting for most in the group. As we continued uphill, we found many other interesting and showy plants, including some that were being dug up by poachers! At the top, we explored the Pacific Crest Trail as it heads east of Cook & Green, and  got a taste of the rich flora of the region and its relationship to the geology.

Monday was Calochortus day, and we traveled to three very different locations finding all three species we were seeking in nice bloom: C. persistens high up on Gunsight Ridge just west of Yreka; C. greenei just over the border into Oregon; and C. macrocarpus in a wide valley north of Mt. Shasta.

Day three saw a return to Cook & Green, this time on the PCT west of the pass towards Red Buttes. We encountered many species not seen on the other side of the pass, including a seep with Cypripedium californicum, the California lady-slipper orchid. The top of our journey to Bee Camp opened up to an area of stunning vistas and a different flora, as the local botany closely follows the local geology and microclimate.

The next day was a trip to Alex Hole, a northeast-facing cirque situated at the shoulder of Coundry Mountain. We found a stunning array of species to occur in and around this glacially-carved bowl, including choice plants from genera Lewisia, Erythonium, and Polemonium, along with several orchid species. This is also the only place we encountered melting snow. I think...

We moved camp south for the rest of the trip, to yet another paradise situated on the summit of Scott Mountain Pass, south of Etna on Hwy. 3. This campground adjacent to large meadows with seeps and fens surrounded by rich woodlands provided ample opportunity for the botanically inclined to lose themselves in the identification and appreciation of such a diversity of species.

Jefferson, we shall return.

Eighteen people, including trip leaders Stella Yang and Carolyn Dorsch headed up to the Sierras the first weekend of August.  We camped off of Hwy 120, at 6,200 feet, near the Clark Fork of the Stanislaus River.  The first day we stayed in the “lowlands,” and explored along the Clark Fork meadow and the Column of the Giants.

Day Two found us up near the top of Hwy 120, just a little west of Sonora Pass.  We spent the day hiking up to St. Mary’s Pass (10,100 feet).  The walk was steadily uphill, but with wildflowers all along the way, low 70s temperature, and nice breezes, the 1,200 foot climb from the trailhead was quite manageable.  Along the way, and at the top of the pass we found many high-elevation flora blooming, including the following:  Pursh’s wooly-pod (Astragalus purshii), Buckwheat (Eriogonum ovalifolium), Sierra Claytonia (Claytonia nevadensis), and Arctic Willow (Salix arctica).  In fruit were two anemones: A. occidentalis and A. drummondii.  All together, it was about a three-mile round trip.  A couple people took the challenge offered by the mountains, and continued their hike up to Stanislaus Peak (11,233 feet) before rejoining the group back at the trailhead in the late afternoon.

Day Three, as a final stop before heading home, we drove down Herring Creek Road.  While it can be stunning in June (elevation around 7,000 feet), we had to work harder to find the flowers.  Following the water, we came across beautiful colonies of Alpine Lily (Lilium parvum) near Herring Creek. The trip was capped off with a short visit along the Trail of the Gargoyles, where we could admire the amazing geologic formations.  Plans are already in motion for another trip up to the Sonora Pass area.

Late June/early July is the best time to see the flowers at the 6-7,000 feet elevation, but there is plenty to see in early August, so long as you go to the higher elevations. Look for this trip’s highlights at a Member’s Night meeting later in the year! 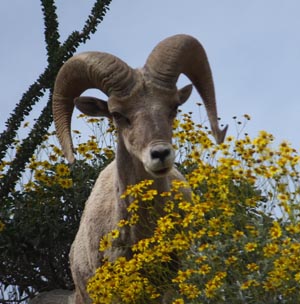 Co-leaders Patricia Evans and Joe Cernac took 17 hearty souls (including CNPS fellow Sally Casey, age 94) on a trip to the desert, despite forecasts of rain. After arriving in Anza Borrego on Sunday March 6, the trip started in the rain Monday with a stop at the visitor center. Two days of sunny hiking followed in Palm Canyon and Culp Valley. Many of the highlights were seeing the desert peach, desert apricot, and desert almond all on the same day. We also saw five bighorn sheep which the state park is partially named after, Borrego, and hundreds if not thousands of sphinx moth caterpillars of various instars (molting phases) devouring the brown-eyed primrose and sand verbenas. Dee Wong even saw one that was digging a hole in preparation for pupating. 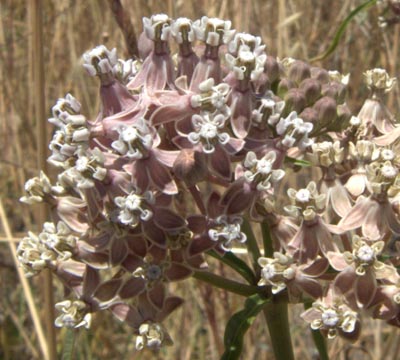 Hike #2 was to see the progression of drought effecting Stile Ranch. There were 11 attendees including the co-leaders Stella Yang and Dee Wong, and Ken Himes as sweep. As the weather heated up without much winter rains, the grasslands along the trail had already started drying out and turning gold and silvery in color. The native grasses such as Elymus glauca, Melica californica and Melica torreyana had begun to set seeds. With most spring wildflowers finished flowering, the summer flowering plants that were in bud (during hike #1) were now flowering, such as the Monardella douglasii, Streptanthus glandulosus var. glandulosus. 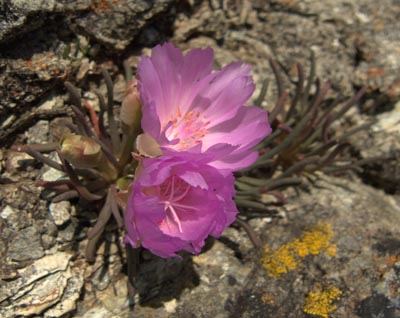 The intention of having a three-part series of hikes to the same location over the course of the year was to see the changes of diversity of one particular area.
Hike #1 started at 9am and ended about 1pm.  Thirty people attended, including the trip leaders and sweeps.  We split into two groups, with Dee Wong and Woody Collins as co-leaders and Huey Shin Yuan as the sweep in one group, and Ken Himes and Stella Yang as co-leaders and Carolyn Dorsch and Michael Yantos as the sweeps for the other group. Thanks to all participants for sharing their knowledge and their time to help make this a very successful trip.

We saw these flowers in bloom:

Our last field trip for the year took us to Castle Rock State Park.

There were 14 in attendance including the co-leaders, Ken Himes and Dee Wong, and with Toni Gregorio-Bunch as our sweep. Thank you Toni! Of the 14 people, there were one new member who joined before the field trip and three that are not members and were enthusiastic to become members of our Chapter. While on the trail, Dee also encountered a young couple from Marin, who were curious about what we were doing, and was handed a membership form and a plant list for this hike. They were so thrilled! We hope this will capture their interest in joining CNPS!

On the morning of the hike, the weather was overcast with light drizzle on and off but cleared to occasional blue skies in the afternoon. The view was quite dramatic with Ken and Dee vocalizing their view of the scenery to be that of the Oregon mountain ranges with mist rising from the forest, rain curtains drifting by in the background, and misty sun rays shining through the clouds. 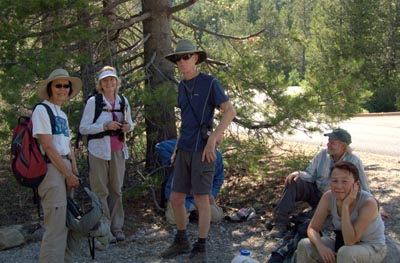 Dee Wong, Ken Himes, and with the help of Paul Heiple and his wife, Linda (who helped shepard the group to be keep the pace going) successfully co-led the Santa Clara Valley Chapter field trip to Lassen Volcanic National Park from Monday, July 14 through Thursday, July 17.  We camped at Summit Lake South and Warner Valley to see geological and botanical wonders that are unique to this area. Including the co-leaders, there were 19 participating CNPS members mostly from our Chapter, along with Deanna Giuliano, president of the Santa Cruz Chapter who was also there, and made it all so fun. 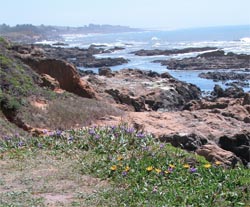 The one mile walk along the Arroyo de los Frijoles (Creek of the Beans) Trail between Pebble Beach and Bean Hollow Beach offers a close-up look at tide pools, wildflowers and colonies of harbor seals and shorebirds.